In this lab, you'll connect your virtual GNS3 topology to the Internet and configure Network Address Translation (NAT) on a router.

Your network topology should match this design.

Tip: Save yourself some time here because the internal network is the same as Lab 6! Open the Lab 6 project, and then use the “Save As” option in GNS3 to create a new project called Lab 9. Don’t just copy and paste the data file outside of GNS3. Your project depends on resources that exist inside the GNS3 VM, so you need to copy your project within GNS3 to also duplicate those resources. 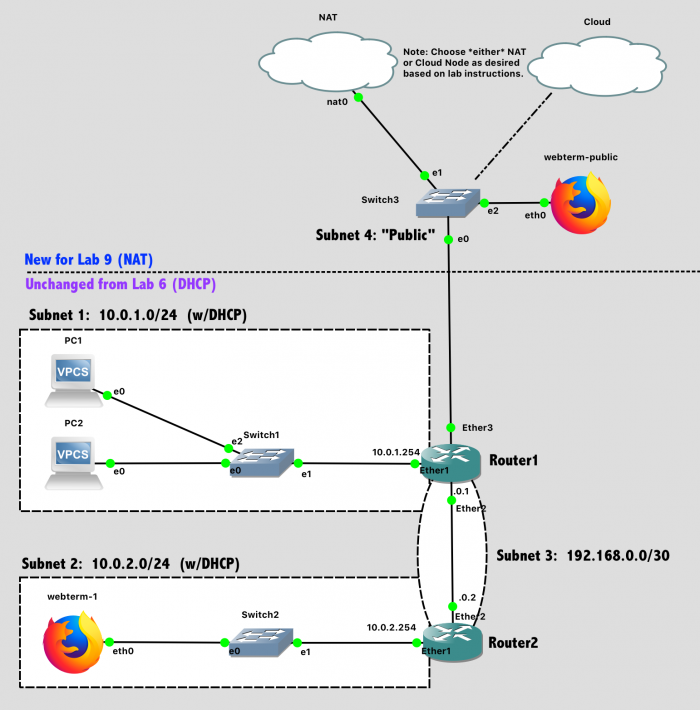 Lab 9 Network Diagram (Note: Subnet labels and dashed borders are for informational use only)

The GNS3 network simulator provides two different nodes that allow access to the physical network - the Cloud node, and the NAT node. 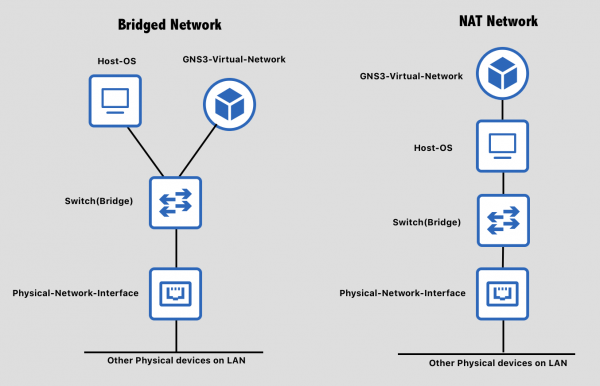 Choose the node type that is most likely to work on your system. Either Cloud or NAT is sufficient for this lab. You're welcome to try to get the cloud (bridged) node working first, and fall back to NAT if needed. Drag that node into your network diagram. Note: Unlike every other node used in lab, here you do NOT want to run your Cloud or NAT node in the GNS3 VM, which would then require you to troubleshoot virtual machine networking too. Instead, you want the Cloud or NAT node to run on your host computer.

Run DHCP on the Router1 interface connected to the Cloud/NAT node, so your router can request an IP from this network. First add the DHCP-client service with ip dhcp-client add interface=ether3 disabled=no. Then, check to see if it is running with ip dhcp-client print, and finally verify that the interface address is set with ip address print

Check the Routing table for Router1 with ip route print. What does the router do with a packet that doesn’t match any existing rule? (Look for a default route, 0.0.0.0/0). Router1 will forward it out ether3, towards the Cloud/NAT node.

Check the Routing table for Router2 next. What does the router do with a packet that doesn’t match an existing rule? (Look for a default route, 0.0.0.0/0). Nothing! There is no default route yet.

Configure RIP on Router1 to distribute information about the default route (0.0.0.0/0) to other routers. This is not enabled by default, but can be activated with routing rip set distribute-default=if-installed. This rule is only needed on Router1, which has a default route set via the DHCP client you previously configured on the port connected to the Cloud/NAT.

One last configuration item is required. You have a number of subnets in your GNS3 network that all want Internet access. However, the NAT node in software will only map a single subnet to the host network. The Cloud node has a similar limitation, albeit one that is imposed by your physical network and physical router. Short of changing your physical network to speak RIP with Router1, the easiest way to handle this is to run address translation on Router1 as well, so that all outbound traffic (from many devices) appears to come from Router1 only. This feature - IP "Masquerading", is a standard feature of Linux and is also available in the MikroTik IP firewall. Enable it by: ip firewall nat add chain=srcnat action=masquerade out-interface=ether3. (out-interface is the cloud-facing interface).

You should be able to ping google.com from everywhere. Try it from webterm-1, Router1, Router2, and PC1.

Submit the following items to the Lab 9 Canvas assignment:

When finished, press the Stop button and exit GNS3. The GNS3 VM (in VMware) should halt and exit automatically.